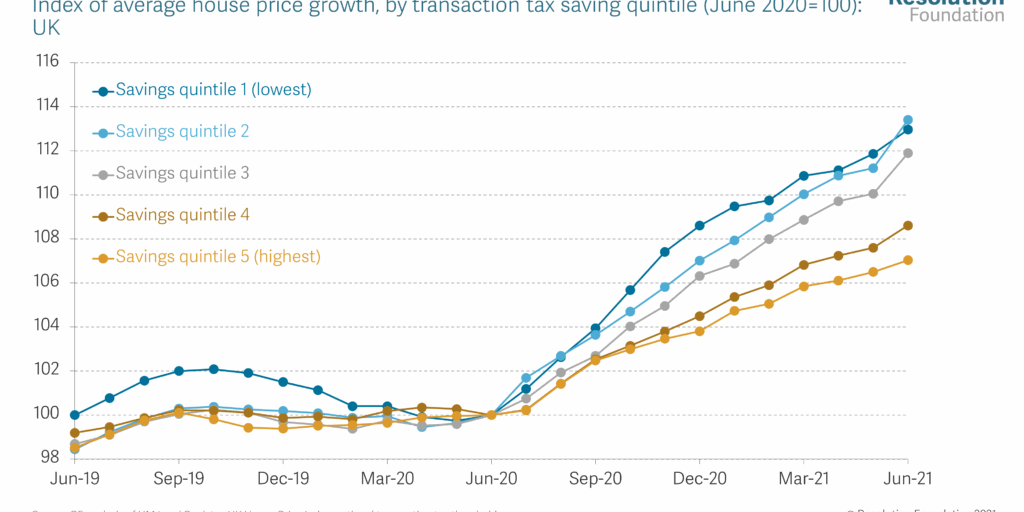 The Resolution foundation think tank has published its report called Housing Outlook Q3 2021 and it contains some interesting colour that house prices have risen faster in areas where the savings from transaction tax holidays have been negligible.

There report - which you can read in full here [https://www.resolutionfoundation.org/publications/housing-outlook-q3-2021/] says:-

House prices have defied expectations over the last year, rising dramatically in the face of the Covid-19 economic crisis. While many commentators have blamed transaction tax holidays for this trend, analysis in this Housing Outlook suggests this is somewhat wide of the mark. Instead, there appear to have been stronger forces at play within the housing market over the past year such as enforced savings during lockdowns, changing housing preferences and super-low interest rates. We conclude that the transaction tax holidays have been problematic less because they were inflationary, and more because they have been wasteful (the Government has forgone an estimated £4.7 billion of tax revenues in England and Northern Ireland as a result).

Spotlight: The effect of transaction tax holidays on house prices

Over the past year, house prices have consistently bucked expectations (not least ours): data released this week shows the average value of a UK home increased by 13.2 per cent from June 2020 to June 2021.[i] To state the obvious, such price behaviour is highly unusual in a recessionary period: as the economy contracts, we would normally expect pressure on both incomes and consumer confidence to drive down house prices. So, what has been different this time around?

A number of distinctive features of this crisis spring to mind. First, the Covid-19 period has been marked by a dramatic increase in the aggregate saving rate as households’ ability to eat out, holiday abroad and the like have been severely constrained. Second, the pandemic appears to have affected housing preferences, with evidence of increased demand for larger homes and less populous areas. Third, mortgage rates have got cheaper and cheaper (at least for those with lower loan-to-value ratios). But fourth, many have pointed the finger at policy, suggesting that the transaction tax holidays introduced across all nations in summer 2020 have been inflating house prices.[ii]

It is reasonable to expect at least part of the savings from any transaction tax holiday to be capitalised into house prices (an HMRC evaluation of the stamp duty cut introduced for first-time buyers in wake of the financial crisis estimated that between 50 and 70 per cent of the value fed through into higher house prices, for example). But logically, if the cuts to transaction taxes have been the overwhelming driver of the house price trends observed over the past 12 months, we would expect to see higher growth in areas where the savings from the change in policy have been most significant as a share of the house price (although we recognise that the housing market works in chains so we would expect the effect to be somewhat dispersed). But as Figure 1 shows, that is not what we observe at all. Prices have grown by more in those local authority areas where the average buyer experienced negligible, if any, savings as a result of a transaction tax holiday, compared with areas where far higher savings were achieved (13 per cent in savings quintiles 1 and 2 compared to 7 percent in quintile 5).[iii]